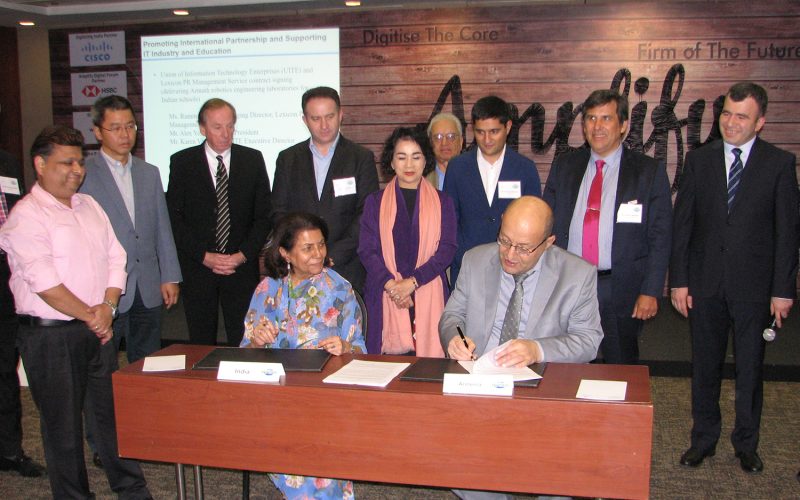 The World Congress on Information Technology 2018 (WCIT) has officially launched in Hyderabad, India, on February 19. Prime Minister of India Mr. Narendra Modi welcomed the guests and delegates from all over the world in his official video message. The Indian Prime Minister has expressed his conviction that the conference would be effective for all involved parties.
The delegation of the Union of Information Technology Enterprises (UITE) which is taking part in WCIT 2018 and will be granted the Estafeta of the coming WCIT 2019 being organized in Armenia, is happily sharing its news and business success.
First, the UITE officials and the Deputy Minister of the Transport, Communication and Information Technologies of the Republic of Armenia, Mr. Arman Khachatryan took part at the WCIT 2018 official dinner during which Mr. A. Khachatryan welcomed the guests and invited them to Armenia to participate at WCIT 2019.
The UITE President Mr. Alexander Yesayan has been elected as WITSA Board of Directors Member by the World Information Technology and Services Alliance (WITSA), the organizer of WCIT. Mr. A. Yesayan has presented the ongoing preparatory works on WCIT 2019 being held in Armenia.
The UITE has already reached an agreement that a big Malaysian delegation will arrive in Armenia in 2019 to take the Estafeta of WCIT 2020 with great honor. The terms of cooperation have also been formed with ASOCIO (The Asian-Oceanian Computing Industry Organization), an organization established in Japan which incorporates ICT and business organizations from 24 countries. They will also visit Armenia to participate at WCIT 2019.
Another victorious news. A memorandum of cooperation has been signed between the UITE on behalf of the Executive Director Mr. Karen Vardanyan, and Lexicon PR Management Service of India on behalf of the Managing Director Mrs. Rama Lutra, according to which the pilot project of the Armenian “Armath” engineering laboratories will be implemented in Indian schools.
WCIT is an international business communication and transaction platform where over 2k business people, innovators, government officials, supranational organizations, investors, and prominent scientists meet to introduce the trends and challenges of the sector by holding B2B meetings and discussions.