From keyboard-less piano to 3D printed chess pieces, Armath lab students have their own production 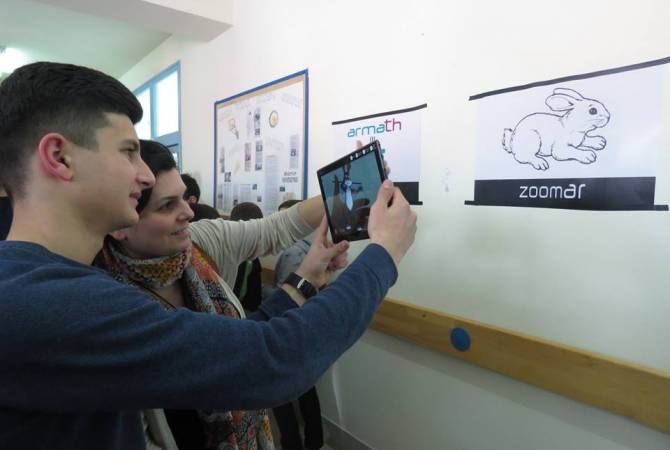 The Armath engineering labs, which unite more than 5,000 school children from Armenia and Artsakh, have transformed from knowledge consumers to small manufacturers, sometimes even providing self-sustainability. ARMENPRESS presents the joint projects of coaches and students of Armath labs from Sevan, Vardenis, Talin and Devi schools.
Pendants upon order: Designed by students, made by Armenia-made 3D printer
Various themed pendants, such as car license plates or custom made ones, are made and sold in the Sevan Armath lab. The group which has more than 40 students design the pendants, which is later made by a 3D printer. The proceeds from the sales is used to acquire the printer’s filling material. “We also take into account the market demand, we take orders, we prepare the picture with the program and print it. We try to solve the self-sustainability issue, we use the sale proceeds to buy the filling material,” coach Hasmik Arakelyan says.
Chess pieces and Christmas decorations with CNC device
In Vardenis, Armath students created an Elephant-Puzzle, which is an intellectual game for children. Each puzzle piece depicts a letter from the English alphabet. “The design is entirely made by the children, and then the CNC device does the printing,” coach Mary Barseghyan says. The students of the lab also used the CNC device to make New Year’s decorations, and even chess pieces.
Augmented reality app made by 14-year-old 14-year-old
Arman Barseghyan from Talin’s Armath lab founded the Zoomar AR app in collaboration with a friend, Vigen Khachatryan, also 14. The app is already available in Google Play and the iOS version will soon be available. “The essence of the program is that we add AR to the pages of children’s books, which includes interactive animated 3D models”, the children said. They already take orders from different organizations. “In the future we want to make reforms in education and include biology and physics book pages in our app and present it under AR. We plan to make a proposal to the education and science ministry”, the 14-year-old said. Arman has decided to become a programmer and specialize in VR and AR.
Armath and radio-engineering lab students come together over keyboard less piano idea
Armath students of Vedi have joined forces with the students of the radio-engineering lab of the same city and created a piano without keyboards. It is a uniquely designed box, which plays from hand movements. It plays like a piano with assistance of infrared rays. Coach Orbel Khachatryan says the keyboard less piano is a genius invention, but the kids however think they’ve done a simple thing.
ARMENPRESS