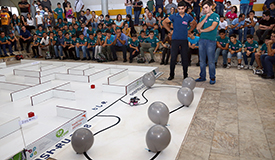 On September 16, the 11th ArmRobotics Championship has been held at “Mkhitar Sebastatsi” Educomplex. 42 robots from all regions of Armenia and Artsakh competed in overcoming obstacles and finding a way out of the maze․
The participants of the 11th ArmRobotics Championship are aged between 10 and 18 and mainly represent the "Armath" Pan-Armenian Educational Network. They created robots in about two months and experimented the latter a at the hackathon being held a day before the championship.
"One of the peculiarities of this competition is that most of the robot details and fittings have been manufactured by three-dimensional printers and a drill rig. They have also prepared print cartridges (plata) by themselves, write the code corresponding to the requirements of the competition and so on. We are extremely excited that the younger generation develops its own engineering thinking, creates own solutions and creates independently: they are our future, our future heroes", - says the organizer of ArmRobotics Cchampionship, the Executive Director of the Union of Advanced Technology Enterprises (UITE) Karen Vardanyan.
The General Sponsor of the 11th Robotics Championship, the Co-Founder and CEO at Ucom Hayk Yesayan, notes: "We have repeatedly stressed that Ucom's corporate social responsibility highly emphasizes all the projects related to the development of engineering thinking, programming and robotics skills. We carefully follow up that these young people not only get professional knowledge and skills, but also have the opportunity to demonstrate them, to understand their strengths and weaknesses, to fix the shortcomings and become the newest generation of future businesses”.
The sponsor of the contest, the World Vision Armenia Director Zhirayr Edilyan notes: "Such competitions are an irreplaceable platform where children demonstrate their abilities in the field of robotics and acquire so much confidence in their strengths and abilities. This self-confidence and enthusiasm are just necessary for especially children living in remote communities of Armenia to continue learn and fight for the best future and life.”
Representatives of 42 teams presented their robots to the public and professional jury members. The jury members were Tigran Zakaryan (Radiophysics and Communication Institute), Paylak Ghukasyan (ArtElektro), Patvakan Hakhinyan (Vanadzor Technological Center), Hrachya Makaryan (Pool), Hrant Khachatryan (Symotec), Hrach Khachatryan (Symotec), Atanes Khachatryan (Instigate Robotics) and Arman Poghosyan (Instigate).
Summing up the results, the jury members chose the best. The pupils of Sisian Secondary School N 2 were awarded with encouragement prizes. The IT center of Artsakh occupied the third place, the second place was awarded to the team from the high school of Sevan.
The students of the Armath team of Gyumri NPUA became the winners. The winners’ trio received money rewards from Ucom and World Vision Armenia.
The students of the Armath team of Gyumri NPUA have received also mobile phones from the General Sponsor of the Championship, the Ucom.
The objective of the contest of robots overcoming obstacles and finding a way out of the maze is to engage young people in the processes of development of robotics, automation and different IoT (Internet of Things) gadgets, encourage them and introduce to the public the importance of development of the field and the ways to approach global technology trends.
“ArmRobotics” robotics development and support program is being implemented in Armenia by the UITE since 2008.