16 years old Edgar has created an automated school ring system: it will be launched on September 1 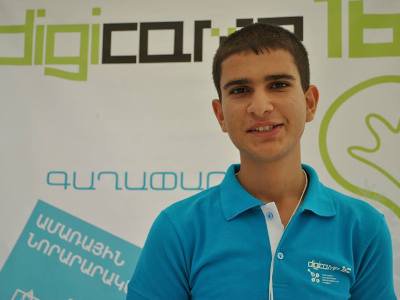 16 years old Edgar Poghosyan, a pupil of the Sisian High School 11th grade, has come up with an interesting initiative. He has developed an automated school ring system in the web platform. And now Edgar is waiting for his own product launch being held on 1st of September in his own school.
Edgar Poghosyan is attending the "Armath" Engineering Laboratory of Sisian High School. He has started to study programming in 2015 at the center for adults and later in 2016, after the opening of the Armath engineering laboratory by the Union of Information Technology Enterprises, he has moved and developed his skills there.
Edgar's automated call system is called Clever Sentry, a clever sentinel. It is available on theiweb site. The Clever Sentry can also be operated on the mobile phone. The system has four main functions: the bell rings at the right time, and it does not necessary that someone sits in the teachers’ office by looking all the time at the watch to ring the bell at the right time. The system has also a separate button which switches the alarm signal. The third function of the system is the sounding of songs during the breaks. Moreover, the songs of the media library are specially selected by Edgar. Mostly these are Armenian ethnographic and patriotic songs, through which the national values are sown among the pupils. Besides the songs, the pupils can also listen to some thematic materials. For example, on Yeghishe Charents’ birthday, one can listen to any story about him. And the fourth function of the system is the RA National Anthem sounding at the very beginning of the lessons.
Edgar mentions that 3-4 out of 5 Sisian city schools including the school where he studies will start to use the Clever Sentry since 1st of September. The educational centers have already installed the appropriate equipment.
Before creating the Clever Sentry the 16 years old Edgar had gained enough experience in programming. He had created websites and earned money. His aim is that many schools will start using the Clever Sentry and it will become more public.
The Clever Sentry has a slogan: “The Future starts from the School”. Edgar believes that if someone has qualified education he can create better future.
By the way, the csentry.com website has a special block where more enthusiastic pupils can see how many days, hours, minutes and seconds are left till the 1st of September.